skip to main | skip to sidebar

Here's an environment piece I spent a few hours on this weekend. It's inspired by a rock in Phang Nga Bay in Thailand called 'James Bond Island' that I visited, ohhh, 9 years ago? Man that makes me feel old! 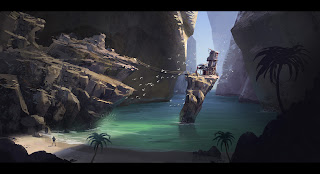 And some head sketches I inked when I was really tired, which is definitely why the lines are wobbly. Honest. 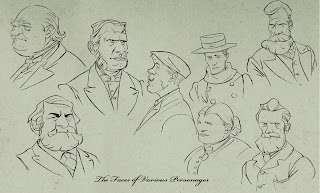 Also, many thanks to Concept Art World and Kotaku for running articles on my project. It's very flattering to receive attention like that!

Here's a bunch of character designs for industrial workers toiling away in the factories of Dustrum. I want to do some architectural designs, like I did for the slums, to accompany these characters:

I took a slightly different approach to these guys and created silhouettes in Photoshop that I then printed out and used as a basis for the linework using a Colerase pencil. I then scanned the pencils in and coloured them up in PS. Here are the original silhouettes:

Also, a couple of people asked if I could show the process behind one of my pieces that uses 3d as a basis, so here are a couple of images for the Silver Dagger I posted last time. I initially did some doodles on paper for the design, but they were too crappy to scan! So after that I did a quick silhouette design in Photoshop:

Then I created a 3d model in Maya using custom parts and some kitbashed stuff from models I found online. I doodled over the top of a screengrab to get some ideas for how I wanted the details to look. I do this a lot (drawing over my work) often in bold red to remind myself of things I need to fix/add. I find it's really handy to do this when you leave a piece part way through as it helps you focus when you go back to it again. It's also a good way to quickly test out ideas. 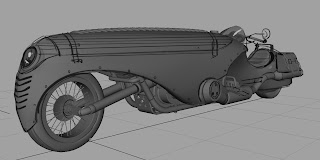 After the modeling is done I do a quick render as a start for the paintover. This model ended up being more finished than most of my blockouts. I often just render a simple directional and ambient occlusion render with just a default lambert rather than adding specific materials, but this time I decided to try doing more in the render and less in Photoshop: 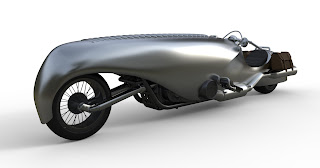 After that it's just a case of adding details, overlays etc.Hope this is useful.

Nick Carver
Hi there. I'm Nick Carver and this is my art blog. You can contact me here: oishiiniku (AT) hotmail.com

See More of My Work